The City of Laurel was a founding member of the Baltimore Washington Corridor Chamber of Commerce’s (BWCC) first Electricity Purchasing Cooperative in 2004, which was developed for the BWCC by CQI Associates of Columbia, MD.

The City of Laurel purchases commercial electricity for 33 accounts in accordance with the State of Maryland’s de-regulation legislation which permits customer choice.

The total reduction in the City of Laurel’s electricity supply service costs for the past five years has been $197,335 when compared to the utility standard offer service rate. The savings is the equivalent to one year’s annual cost for the City’s electricity.

Mayor Craig A. Moe said, “This is a perfect example of a public/ private partnership that has served the citizens and businesses of Laurel by reducing costs and improving the bottom line. We are very happy with the savings we have achieved.”

The Chamber program combines the purchasing power of the members to achieve competitive pricing which has constantly provided savings and budget stability since 2004. The BWCC, through CQI Associates, now offers both commercial and residential purchasing programs for both electricity and natural gas through programs for BWCC members and their employees.

Walt Townshend, CEO of the BWCC said, “Our core focus is to help our members grow their business and solve business problems. Utility costs are a major component of the costs of business—and government. We are honored to have the City of Laurel as a member and participant, and very pleased to work with CQI Associates, which has a national reputation for energy management and purchasing.” 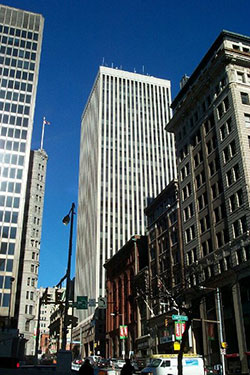 201 N. Charles Street is a 326,768-square-foot, 30-story, Class-A office building located blocks from Baltimore’s Inner Harbor. Tenants include Bank of America, Booz Allen Hamilton, and Johns Hopkins University. The building is in exceptional condition and has been expertly maintained by Stratford Realty Management Company, giving the appearance of a building far younger than one built in 1967. 201 N. Charles Street is a BOMA (Building Owners and Managers Association International) award winning building.

CQI Associates completed an initial energy assessment of the building in early 2009, then provided Stratford Realty Management Company with a list of recommendations for improving energy efficiency and working on the qualifications of the LEED for Existing Buildings: O&M rating system. Both companies worked closely together to implement the recommendations and complete the certification process.

The initial investment in the project’s green and sustainable technologies, strategies, and design resulted in an estimated savings of more than $130,000 in the first year. With an ENERGY STAR performance rating of 80, 201 N. Charles Street is 60 percent more energy efficient and annually saves $1.43 per square foot in energy costs when compared to the average U.S. office building.

A significant program highlight recommended by CQI Associates was the addition of variable frequency drives (VFDs) on the major air handling units in the building. Control was also added to the building automation system, thus allowing control of the VFDs, as well as the ability to control the dampers for each floor. This in turn enables the building automation system to efficiently manage the air flow to different floors, which is particularly useful when the floors are unoccupied. The management team has already seen a reduction in energy costs and consumption due to the implementation of the VFDs.

Another project highlight helping to garner the LEED Gold was the installation of dual flush toilets in the ladies rooms on every floor in the building. A 22#37; reduction in water use for all fixtures was found when using a performance calculation according to the LEED templates.

“CQI Associates was thrilled to partner with Stratford Realty Management Company to complete the U.S. Green Building Council’s (USGBC) LEED certification for 201 N. Charles Street,” said Richard Anderson, principal of CQI Associates, LLC. “Our passion is for the environment and helping businesses achieve a higher level of sustainability and corporate social responsibility. With origins in energy management, CQI Associates has the experience and expertise to lead the most unique and challenging projects toward successful implementation and LEED certification.”

Managed by Cushman & Wakefield, 2001 K Street, NW is a 356,820-square-foot, 12-story office building located on the northwest corner of 20th and K Streets — a few blocks from the White House and George Washington University. The building is in exceptional condition and includes a natural stone facade as part of its striking architectural design. A retail branch of Eagle Bank is located on the first floor, with floors two through eleven occupied by other world-class and globally-renowned businesses like the law offices of Clifford Chance LLP and the architecture firm Skidmore, Owings & Merrill LLP. A lower level includes two mailrooms, a fitness center, and storage areas. The facility staff began embracing green operations long before the actual LEED® certification process began. In 2008, the management team installed motion sensors for the garage lighting and later introduced a recycling program where tenants recycle mixed paper, plastics, bottles and cans.

The initial investment in the project’s green and sustainable technologies, strategies, and design resulted in an estimated savings of more than $51,000 in the first year. With an ENERGY STAR rating of 79, 2001 K Street NW is 58 percent more energy efficient and annually saves $1.03 per square foot in energy costs when compared to the average U.S. office building.

According to Property Manager Timeeca Mitchell, “The tenants have really embraced working in a green environment. Most interior modifications are completed to meet LEED® standards, whether the tenant pursues certification or not. We are also thrilled with the response to the recycling program and have 100% participation from tenants on all floors. Everyone has really come together to be better global citizens and improve the efficiency of our working environment.”

Chief Engineer Don Bauman shared, “Every month when we receive the energy bill, we are excited to see the payback on our investment continue. At the current rate, we expect to reach a full payback in less than two years. It is very impressive, as with most significant projects in other areas of business, it may be hard to measure the return on investment. We are able to track our progress every month and it is truly amazing.”

Working toward greater water conservation, dual flush toilets were installed in all of the women’s restrooms and .5 gpf (low flow) urinals in the men’s restrooms, as well as low flow aerators on the restroom faucets, thus reducing the overall water usage by over 30%.

Another important component to achieving greater energy efficiency was the HVAC system. As a part of the project implementation, variable frequency drives (VFDs) were installed on the Air Handling Units, cooling tower fans, and most recently on the condenser pump. Beyond improvements to the HVAC system, occupancy sensors were added in the restrooms and office spaces. The purpose is as simple as the name: to save electricity when restrooms and offices are not in use. The building lighting also utilizes high efficiency low mercury T-8 fluorescent bulbs.

“We were delighted to partner with Cushman & Wakefield on this LEED® Gold EB Certification project and help to further advance its global leadership and commitment to green design and operations in commercial real estate,” said CQI Associates Principal, Richard Anderson.

The Embassy of Finland in Washington, DC partnered with CQI Associates, LLC, a Columbia, Maryland-based energy and environmental management consulting firm, to become the first embassy in the country to complete the U.S. Green Building Council’s (USGBC) Leadership in Energy and Environmental Design (LEED®) Gold for Existing Buildings (EB) Certification.

Located across from the Vice President’s residence on Massachusetts Avenue, the embassy has been environmentally friendly since it was originally constructed by two Finnish architects, Mikko Heikkinen and Markku Komonen. The harmonious incorporation of the modern, glass-and-copper building into the surrounding landscape of Normanstone Park was quite progressive for the mid-1990s. The surrounding nature was left largely undisturbed as only three trees were cut on the property to make room for the building, and sunlight was used in innovative ways to decrease the need for electrical lighting. The building’s original design was one of the initial highlights that encouraged the embassy staff to apply for the U.S. Environmental Protection Agency’s (EPA) ENERGY STAR, which the embassy was awarded in September 2008, and subsequently the LEED® Gold EB Certification, awarded in January 2010.

CQI Associates completed an initial energy assessment of the building in the spring of 2009, then provided a list of recommendations for improving energy efficiency and working toward the LEED® Gold EB Certification. CQI Associates worked closely with the Embassy of Finland’s staff to implement the recommendations and complete the certification process.

“We are extremely proud to be the first embassy in the U.S. to achieve this recognition,’ says Finnish Ambassador Pekka Lintu. &Retrofitting our embassy building demonstrates that we Finns strive to be active but energy-efficient members of our neighborhood and the greater D.C. community. It is also worth noting that by maintaining this demanding status, the Embassy of Finland is supporting a range of important initiatives by local US companies that offer green jobs for the growing green workforce. We hope that our adaptation of green principles and our commitment to the well-being of people and the environment will inspire other foreign missions to view their opportunities in this field.”

A significant part of the process to further improve energy efficiency was the introduction of a free-cooling system that halved the use of electricity-powered cooling. This increased the working life of the mechanical cooling facility by more than half. Several overlapping features of the heating and cooling systems were eliminated. The heating management operating system was replaced with a more modern system to improve the regulation of the outside temperature’s effect on the building’s indoor environment. In addition, variable frequency drivers were installed on the pumps and cooling tower.

Furthermore, toilets and faucets were fitted with water saving devices, while rigorous policies were implemented to ensure sustainable practices: occupancy sensors were installed in offices, recycling became a major priority, and all procurement became subject to environmental considerations. Used furniture and other durable goods were donated to local schools and organizations. All cleaning supplies were replaced with environmentally sound products, and low-impact chemicals were introduced in site maintenance such as gardening. A stringent non-smoking policy was implemented, and garage space was re-designated to encourage staff to cycle to work or use hybrid vehicles.

With an ENERGY STAR rating of 78, the Embassy of Finland is 56 percent more energy efficient and annually saves $0.86 per square foot in energy costs when compared to the average U.S. office building.

“We were truly honored to be selected for this project by the Embassy of Finland, known for their great contributions and commitment to the environment,” said CQI Associates Principal, Richard Anderson. “Our teams worked together to achieve the first LEED® Gold EB Certification for an embassy in the United States. We believe this is just the beginning and hope to work with other diplomatic missions to further their commitments to improving the environment.”

Any cookies that may not be particularly necessary for the website to function and is used specifically to collect user personal data via analytics, ads, other embedded contents are termed as non-necessary cookies. It is mandatory to procure user consent prior to running these cookies on your website.