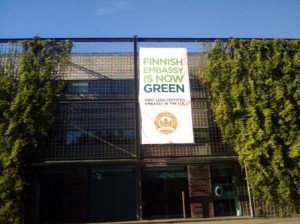 The Embassy of Finland in Washington, DC partnered with CQI Associates, LLC, a Columbia, Maryland-based energy and environmental management consulting firm, to become the first embassy in the country to complete the U.S. Green Building Council’s (USGBC) Leadership in Energy and Environmental Design (LEED®) Gold for Existing Buildings (EB) Certification.

Located across from the Vice President’s residence on Massachusetts Avenue, the embassy has been environmentally friendly since it was originally constructed by two Finnish architects, Mikko Heikkinen and Markku Komonen. The harmonious incorporation of the modern, glass-and-copper building into the surrounding landscape of Normanstone Park was quite progressive for the mid-1990s.  The surrounding nature was left largely undisturbed as only three trees were cut on the property to make room for the building, and sunlight was used in innovative ways to decrease the need for electrical lighting. The building’s original design was one of the initial highlights that encouraged the embassy staff to apply for the U.S. Environmental Protection Agency’s (EPA) ENERGY STAR, which the embassy was awarded in September 2008, and subsequently the LEED® Gold EB Certification, awarded in January 2010.

CQI Associates completed an initial energy assessment of the building in the spring of 2009, then provided a list of recommendations for improving energy efficiency and working toward the LEED® Gold EB Certification. CQI Associates worked closely with the Embassy of Finland’s staff to implement the recommendations and complete the certification process.

“We are extremely proud to be the first embassy in the U.S. to achieve this recognition,” says Finnish Ambassador Pekka Lintu. “Retrofitting our embassy building demonstrates that we Finns strive to be active but energy-efficient members of our neighborhood and the greater D.C. community. It is also worth noting that by maintaining this demanding status, the Embassy of Finland is supporting a range of important initiatives by local US companies that offer green jobs for the growing green workforce. We hope that our adaptation of green principles and our commitment to the well-being of people and the environment will inspire other foreign missions to view their opportunities in this field.”

A significant part of the process to further improve energy efficiency was the introduction of a free-cooling system that halved the use of electricity-powered cooling. This increased the working life of the mechanical cooling facility by more than half. Several overlapping features of the heating and cooling systems were eliminated. The heating management operating system was replaced with a more modern system to improve the regulation of the outside temperature’s effect on the building’s indoor environment. In addition, variable frequency drivers were installed on the pumps and cooling tower.

Furthermore, toilets and faucets were fitted with water saving devices, while rigorous policies were implemented to ensure sustainable practices: occupancy sensors were installed in offices, recycling became a major priority, and all procurement became subject to environmental considerations. Used furniture and other durable goods were donated to local schools and organizations. All cleaning supplies were replaced with environmentally sound products, and low-impact chemicals were introduced in site maintenance such as gardening. A stringent non-smoking policy was implemented, and garage space was re-designated to encourage staff to cycle to work or use hybrid vehicles.

With an ENERGY STAR rating of 78, the Embassy of Finland is 56 percent more energy efficient and annually saves $0.86 per square foot in energy costs when compared to the average U.S. office building.

“We were truly honored to be selected for this project by the Embassy of Finland, known for their great contributions and commitment to the environment,” said CQI Associates Principal, Richard Anderson. “Our teams worked together to achieve the first LEED® Gold EB Certification for an embassy in the United States. We believe this is just the beginning and hope to work with other diplomatic missions to further their commitments to improving the environment.”

Categories: Energy Tips | Tags: cqi associates leed certification, cqi energy management consultants, cqiassociates, embassy of finland leed certification, and finnish embassy goes green
This entry was posted on Thursday, April 7th, 2011 at 12:55 pm. Both comments and pings are currently closed.
This website uses cookies to improve your experience. We'll assume you're ok with this, but you can opt-out if you wish. Cookie settingsACCEPT
Privacy & Cookies Policy