Renewable Energy News: The Current State of Hydropower in the United States

Hydropower use has fallen by 0.4 quadrillion Btu this year, representing a 13.9% decrease compared to 2011. 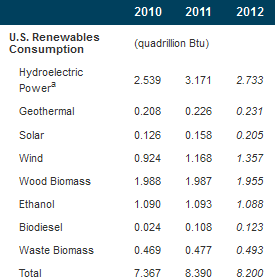 However, the decline in hydropower use is not necessarily a bad thing. The primary reason for the drop in usage is due to the growth of other renewable energy forms, such as wind power and geothermal electricity.

The History of Hydropower in the United States

Since this day, hydropower has played a small, yet important role in the overall energy production in the U.S. and remains one of the cheapest ways to produce electricity.

The Current State of Electricity Prices in the United States

The United States Energy Information Association (EIA) reported average residential electricity prices across the U.S. at 12.10 cents per kilowatt hour in September 2012, the last month they released data. This number is expected to drop slightly once the numbers for October 2012 are calculated. And the average residential electricity price for 2012 is projected at 11.84 cents per kilowatthour, a 0.4% increase compared to 2011. 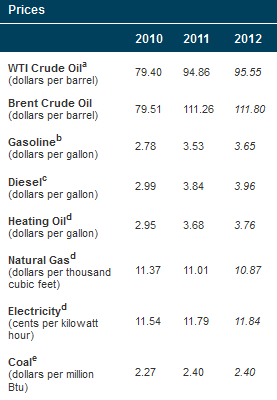 This winter, with temperatures expected to be 13% colder than last year, EIA expects U.S. electricity prices to rise slightly compared to 2011, 5%.

Of course, all of the numbers above are national averages and can vary depending on where you live.

CQI Associates has saved our public and private commercial clients well over $1,500,000,000 based on our energy and environmental program and project saving recommendations.

Categories: Domestic Energy Supplies and Uncategorized | Tags: electicity prices, hydropower, renewable energy supply, and renewable energy use
This entry was posted on Friday, November 2nd, 2012 at 9:36 pm. Both comments and pings are currently closed.
This website uses cookies to improve your experience. We'll assume you're ok with this, but you can opt-out if you wish. Cookie settingsACCEPT
Privacy & Cookies Policy